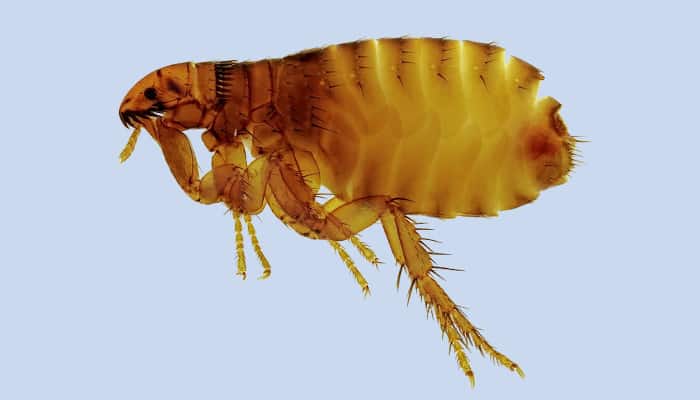 It’s important to understand that there are 2,500 different species of fleas. When most people are talking about fleas, they’re referring to either dog fleas or cat fleas as they are the most common type to enter their home on the fur of their dog or cat.

So the question is can cockatiels get or “catch” these dog/cat fleas from your pet? The short answer is no. – Cockatiels cannot catch dog fleas or cat fleas or indeed fleas from any other mammal. The reason is that fleas normally specialize in one host species or group of species. In other words, dog fleas will only choose dogs as their host and jump around between dogs. Likewise for cat fleas – They will only pass between cats.

That is not to say a dog flea or cat flea cannot bite a cockatiel. It could in theory bite a cockatiel if it landed on one, but the flea will not consider your cockatiel as an intended target or host. The flea might bite it once but it won’t latch on to the bird with its claws and it won’t try to reproduce in its feathers or anything like that.  It’s similar to how dog/cat fleas can randomly bite a human if it lands on someone but it’s not going to stay there and reproduce or anything. If a cockatiel sees a dog/cat flea or is bitten by one, the cockatiel will likely eat it and that will be the end of that!

That’s not to say you don’t need to do anything to treat dog or cat fleas in your home. Your cockatiel might be fine but you most definitely need to take your dog and/or cat to the vet and get them treated. You might also have to get rid of fleas in your carpets on your couch and cushions. Fleas don’t live very long when they’re not on their host due to a lack of food, but if they are on your carpet, they can live a few days and then jump back on to your pet and infect them all over again. Moral of the story – take quick action as soon as you find fleas.

When the flea has found a compatible host (dog or cat), it will attach itself to the animal using its sharp claws and then feed from it by biting it and sucking up its blood. Fleas will then reproduce, and lay eggs on their host which will produce more fleas and the cycle continues.

What about “bird fleas”?

As mentioned above, there are a total of about 2,500 different species of fleas but only about 3% of them can be considered to be specific parasites of birds. The most common bird fleas are as follows:

The hen flea (Ceratophyllus gallinae) can live on a wide range of host birds, mostly birds with dry cavity or semi-cavity nests. It commonly attacks poultry, and can bite humans and other mammals.

The Duck flea  (Ceratophyllus garei) –  is associated with the often wet, ground-built nests of ducks, waders and other water birds.

The Moorhen flea (Dasypsyllus gallinulae) latches on to the host bird itself with its strong claws rather than living almost exclusively in its nest.  This bird flea has many hosts including the common moorhen, Eurasian woodcock, grouse, European robin, gold crest, willow tit, and Eurasian treecreeper.

Those are the most common bird fleas that exist in the wild.  The chance of a domesticated cockatiel that lives indoors ever catching any of these bird fleas is negligible. It’s just not going to happen.  So long as your bird is healthy and free of bird fleas when you purchase him, you will have nothing to worry about.

Cockatiels that live in an outdoor aviary could in theory catch bird fleas from another infected wild bird that somehow manages to get into the aviary. But again, as above, the chance of that happening is very small.

A cockatiel is much more likely to get red mites (Dermanyssus gallinae) than fleas.  Red mites stay hidden during the day and then come out at night to literally suck the blood from the bird. These mites also carry and spread diseases. In numbers, they can do a lot of damage to a cockatiel. I will discuss red mites in more detail in a separate article.

Cockatiels can’t catch dog or cat fleas, although they could in theory get randomly bitten if a flea lands on them. Bird fleas do exist in the wild but are highly unlikely to pass to a cockatiel, especially one that lives indoors.  Red mites are more of a threat to cockatiels than fleas.