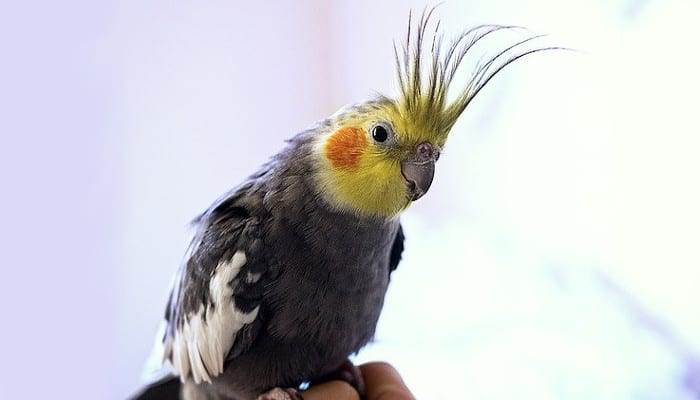 Yes, cockatiels molt. – Molting is the process of a bird losing old damaged feathers and growing new ones. Cockatiels’ feathers get damaged for many reasons – preening, nesting, extreme temperatures and rubbing against the cage all take their toll on their feathers.

When do cockatiels first molt?

A baby cockatiel will have its first baby molt at about 6 months old. Baby cockatiels have a lot of fluffy downy feathers that it needs as insulation to keep warm after birth. It will lose all those downy feathers over a period of a few weeks and so that first molt is quite a messy one! Future molts won’t be as intensive.

Before their first molt, baby cockatiels often have “quills” on top of their heads. These quills are in fact undeveloped feathers behind the crest and the crest itself is often raised.

When do adult cockatiels molt?

Cockatiels will do a heavy molt twice a year – once in the spring and the second molt in around August – September.  During a heavy molt, a large number of the cockatiels’ main feathers will be replaced. The process takes about seven weeks. The heaviest molt will usually be just after the breeding season after the young have become independent.  Another factor is the climate and temperature. If spring and the start of summer are very warm, the molt will be more intense than if the weather had been cold and wet.

The rest of the year, a cockatiel will be continuously losing and replacing feathers but in a much more gradual way.

Molting can be uncomfortable for the cockatiel and it can cause them to get a bit cranky. The process can cause their skin to be itchy and they might even try to speed up the process by plucking out some of the older feathers with their beak. You can help soothe this itching by giving them showers with a water mister / spray several times per week. Since they can’t reach the feathers on their head to scratch them, you can help them out by gently scratching their heads to soothe the itchy feeling.

Apart from the itching, a cockatiel will be a bit more subdued and lethargic than usual during the molting. During a normal molt, research has also found that their temperature will be slightly higher than usual.

Feathers are made up of over 80% protein so to generate all that extra protein for their new feathers, you need to feed them foods rich in protein. Bread soaked in milk, freshly caught insects, hard-boiled eggs and bird pellets containing protein are all excellent sources of protein to help them through the molting process.

Molting can also put a strain on a cockatiel’s resistance to disease. To compensate for this, you should increase the level of vitamins your cockatiel eats either by eating more fruit and vegetables and/or taking vitamin supplements for birds.

French molt is a serious disease that affects many species of birds. It is also known by the name “BFD” (Budgerigar Fledgling Disease). It’s quite rare in cockatiels but cockatiels can and do get it.

French molt is when fledgling birds who are ready to leave the nest suddenly lose all of their newly acquired tail and flight feathers. In extreme cases, the birds can lose of their feathers.

This serious disease means that the worst affected birds can’t fly and look really shabby and in bad condition.  Since they can’t fly, the birds are nicknamed “runners” or “infantrymen”.

Some cases of French molt are less serious and the birds only lose a few tails feathers with which they are still able to fly.

Not much is known about the cause of this disease and unfortunately there isn’t a known cure. Birds with the disease are usually in otherwise good health and aren’t suffering but they do tend to live shorter lives.

If you suspect French molt in some of your cockatiels, you should take them to a veterinary for diagnosis because it could well be an abnormal molt which can be treated (see below).

If your cockatiel loses too many feathers all at once and seems to be having trouble replacing them, that is called an abnormal molt. An abnormal molt is also a molt that occurs in the wrong season.

In the majority of cases, these abnormal molts are caused by extreme temperatures (high or low), sudden changes in weather, stress, disease or shock.

A common cause of abnormal molt is due to a problem with the thyroid gland. This can be diagnosed by a vet and treated with special dietary supplements.

Abnormal molts brought on by stress usually result in heavy molts at times of the year when they shouldn’t be molting. In cockatiels, the cause of the stress is often due to them not being used to their new surroundings and/or being disturbed at night.

Cockatiels need about 11 hours of uninterrupted rest and sleep at night. If they keep getting woken up, they get cranky and stressed and that could bring on an abnormal molt.

Also, cockatiels can’t see very well at night and are prone to night frights because they think that every noise is a predator. If you suspect night frights as the cause, you should get your bird a night light to put by its cage and make a special effort to ensure your cockatiel gets plenty of peace, quiet and rest at night.

Another possible cause of abnormal molting is a lack of certain amino acids in the diet. Amino acids are what make up proteins, so correcting the diet to include more protein will usually solve the problem. Both plant and animal proteins are a key part of the diet as well as a vitamin and mineral supplements.

As mentioned above, big temperature swings can cause abnormal molting so it’s essential that the birds are well housed and protected from the elements.

In the winter, it’s a good idea to provide a lamp as a source of heat. There are special fluorescent lamps for birds which provide the full range of colors found in natural sunlight as well as a suitable level of ultra-violet light. These lights have been scientifically proven to improve birds’ biological functions, including the fixing of calcium in the bone tissue. They are excellent at preventing many health problems, including abnormal molts.