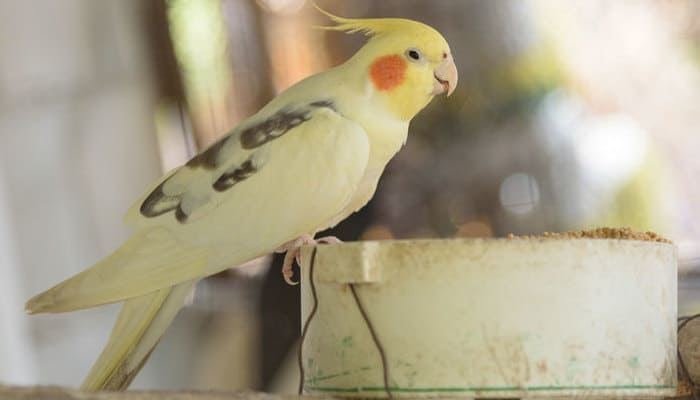 To answer this question, I need to define what we mean by “grit” in the context of cockatiels and birds in general.

In the context of bird care, there are in fact two different types of “grit”:

Let’s look at each type in more detail.

“Insoluble grit” is the type of grit that most bird owners are referring to when they talk about “grit”. When owners are wondering whether they can give “grit” to their cockatiel, it is this “insoluble grit” that they are talking about. Insoluble grit is basically gravel. It’s the name given to a mix of various very small pieces of rock. It’s called “insoluble” because it can’t be dissolved into the birds’ digestive system.

Insoluble grit is often given to birds like chickens or pigeons. Why would you give small rocks to a bird and why would they even eat it?! Well they use the grit to help them break down and digest their food.

Chickens and pigeons eat seeds. Seeds are hard. Since birds don’t have teeth to chew the hard seeds before swallowing them, these seeds enter the stomach and just sit there.  When birds eat grit, the grit is stored in the gizzard (part of the stomach, before the main stomach). When the bird subsequently eats some seed, the muscular walls of the gizzard contract and expand causing the pieces of grit to collide with the seed to break them down. The process is similar to attrition. The broken-down seeds can then pass into the stomach to be easily digested.

The primary function of this insoluble grit is therefore not as a food itself, but to help the bird break down and digest their food. Having said that, the gravel / small rocks do contain trace amounts of minerals and so by ingesting insoluble grit, the birds are also taking in minerals such as calcium and phosphorus. But to be clear, that is not the primary reason for ingesting the grit.

After a long period of time (a few months at least), the insoluble grit itself gets broken down through attrition and when it is in small enough pieces it also passes into the stomach to be digested and eliminated.

Normally, in the wild, seed-eating birds eat natural grit as and when they need it and when they find it on the ground. But in captivity (battery chickens or pigeons kept as pets, for example), then they need to be given this insoluble grit by the owner.

The answer is no.  Why not? Cockatiels eat seeds, after all. So how do cockatiels break down seeds and digest them? The answer lies in their beak. Cockatiels have hooked beaks and they use them to remove the outer hard layer of seeds before swallowing them. (The process of removing the outer layer of the seed is called “hulling”.)

Chickens, pigeons and other flat-beaked birds need this insoluble grit because they are unable to hull seeds with their weaker flat beaks.

That consensus has now changed of course and most modern books, studies and internet resources on the subject agree that cockatiels and hook-beaked birds do not need insoluble grit.

Ok, so we’ve established that cockatiels don’t need it but is it bad for the cockatiel if it ingests it? Well, in the wild, they ingest all sorts of non-food things including wood, charcoal and yes, gravel (grit).

The difference is that in the wild, they will only ingest a tiny amount but in captivity, if you put a container of it in their cage, they’ll likely take in too much of it which can cause a blockage in the digestive tract.

Another problem with many commercially available grits is that they often contain charcoal. Charcoal is good for absorbing toxins but it will also absorb essential vitamins which will result in vitamin deficiencies.

To sum up – Since cockatiels don’t need it, there is no real reason to give it to them.  Yes, there are minerals in insoluble grit, but there is a much safer source of minerals for your cockatiel – Soluble grit (see below).

Soluble grit is different.  “Soluble” means that it CAN be dissolved into the birds’ digestive system. In other words, it’s a food; or rather it is a food supplement for the bird.

It’s a source of the mineral calcium, which is essential for strong bones, claws and most importantly, the egg shells that the hens’ eggs are made of.  Calcium is also very important in blood coagulation and in the functioning of sinews and organs such as the heart.  So as you can see, calcium is essential in birds and soluble grit is an excellent source.

What is soluble grit made up of?

Soluble grit is often made up of ground-up oyster shells, mussel shells, limestone granules or other sources of calcium.  The exact contents or ingredients will depend on the manufacturer so make sure to check the label to be sure.

Yes. Or rather they need the calcium that is provided in soluble grit.  Alternative sources of calcium for your cockatiel are cuttlebone and mineral blocks. It’s your decision as an owner as to what source of calcium you want to give to your bird. All options are fine.

How to give soluble grit to my cockatiel

The best way is to put it in a separate container next to or near the main food bowl. That way, your cockatiel will only eat as much as it wants / needs and you can see how much it has eaten (if any). For the exact quantity to put in the container, refer to the label on the bottle. They only need a very small amount. If they eat too much of it, there is no real risk to your cockatiel’s health because the excess calcium will simply be released in the poop.