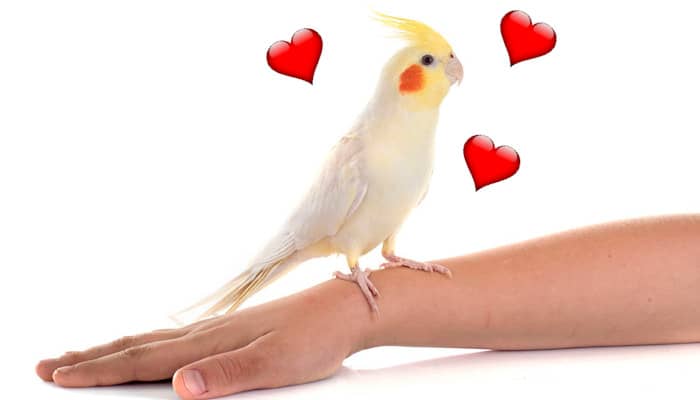 People usually buy a cockatiel as a family pet because they want a companion. Everyone knows that more traditional pets like cats and dogs are affectionate but what about cockatiels? Are cockatiels affectionate?

Yes, in principle, cockatiels are affectionate but it’s never a good idea to generalize when describing animals and birds. Cockatiels are all individuals with their own unique personalities and it’s difficult to say in advance whether a particular bird will be affectionate or not.

In general, a hand-raised cockatiel will be more affectionate than a cockatiel that was raised by its parents because it will have been tamed from birth and well used to bonding with humans. So if having an affectionate and loving cockatiel who likes scratches and being touched is important to you, you should try to get one that has been hand-reared.

How do cockatiels show affection?

A cockatiel that is pleased to see you will make quick movements backwards and forwards when you approach his cage. If he’s keen to be let out of his cage, he will move to the door of the cage and wait in anticipation for you to open the door and let him out.

When out of his cage, a cockatiel will bow his head down and move towards you. This means he wants you to pet him on his head.

The position and movement of a cockatiel’s crest (the feathers on his head) is a good sign of how affectionate he’s feeling. When the crest is flat and tight against his head, he’s in defensive mode and doesn’t want to be touched.

When the crest is straight up, perpendicular to his head, he’s feeling very alert and curious about something and so is too distracted to be petted at that time.

When the crest is in the middle position, the cockatiel is feeling relaxed and mildly inquisitive and is likely open to being petted.

Also autonomous and will leave you alone

While loving and affectionate, cockatiels appreciate ambient attention, too. They are happy when they’re out of their cage while you pursue a quiet activity like reading, watching TV or studying.

Asking to be petted

Tame cockatiels do like to be touched.  They will bow their heads and move towards your hand. This means they want you to rub the feathers behind their crest. They particularly like it when you stroke their head feathers against the grain, starting at the back and moving towards the front. This is because it ruffles their feathers and helps to loosen any dust or debris in their feathers that can otherwise feel itchy. When cockatiels are molting, they itch a lot around their pin feathers and so enjoy these head scratches even more than usual.

Some cockatiels also like getting their cheeks rubbed and gently scratched. If your cockatiel is really affectionate, he will let you kiss him and he will return the favor!

Not all cockatiels like being touched. He will let you know by hissing and / or biting you. If that happens, stop immediately and give your bird some space.

Cockatiels only ever touch each other on their heads and you should do the same. Do not try to pet a cockatiel anywhere else on his/her body. The only time that cockatiels touch each other anywhere else is when they are mating. You do not want your cockatiel to see you as its mate because it will cause all sorts of behavioral issues due to feelings of frustration and jealousy. So only ever touch your bird’s head.

Cockatiels will sit on your shoulder

When out of the cage, a tame cockatiel will sit on your shoulder and use you as a perch. Once there, an affectionate cockatiel will take great delight in nibbling away at your hair or jewelry if you wear a necklace or ear-rings.

If you’re a guy and have a beard, your bird might decide to groom it for you. They also enjoy grooming and gently pecking at eyebrows.

Cockatiels are known to nip people with their beaks, but these are not painful bites with all their force. They are just playing and pecking and it’s another sign of affection. It’s similar to how a playful dog will nibble at someone but never bite.

In the wild, cockatiels greet other birds from their flock with a “contact call” – This is essentially a loud chirping noise and it means “Hello, how are you?”. Likewise, when a bird flies away from the flock, the others will emit a second contact call that means “Bye, take care!”

Well, it’s the same with pet cockatiels in a home and you are a member of its flock. So when a cockatiel sees you or a member of the household entering the room, expect to be greeted with a friendly chirp! Some cockatiels don’t like to be ignored so you might want to reply with a “hello” or a whistle.

When you leave the room or the home, your cockatiel will also emit a second chirp to say “Bye, where are you going? See you later.” You should definitely reply to this one with a whistle otherwise your bird will keep chirping and squawking away and it’ll be your neighbors who suffer!

Males are much more vocal than females. Females will do the contact calls, but apart from that, are usually quite quiet. Males, on the other hand are known to sing, whistle, screech, squawk and talk all day. If you value peace and quiet, you should probably get a female.

For more information, check out my other article: Are cockatiels noisy?

Regurgitation is when an adult bird will “vomit” its food, in order to give the food to its young. They also do this to their mates. It’s a sign of love because they’re giving up their food for you. Cockatiels love eating so it’s a big sacrifice.

If your bird regurgitates its food for you, you should of course be very flattered because he/she loves you very much. But you should also be a little concerned because it probably means he/she considers you as its mate. Being bonded with your pet bird is fine, but you don’t want to be see as its mate because it can lead to aggressive behavior, jealousy, feather plucking and other issues. Affection is fine, bit regurgitation is too much.

Something else to bear in mind – If your bird is regurgitating frequently, it could actually be a health problem and you should get him checked out by a vet.

A cockatiel will like anyone who is gentle and patient and who takes good care of it.  So long as children are very gentle and don’t treat the cockatiel as a toy, then everything should be fine.

As far as young children (less than 10 years old), it’s not easy to know how a cockatiel will react. The problem is that very young often move very quickly and erratically and that can make a cockatiel very nervous. The best advice is to always be present whenever young children are in the room with a cockatiel.

Cockatiels can get hormonal

When I say cockatiels are hormonal, I mean that they get a little too “friendly” (aka “frisky”) with other birds, toys, perches and even their owners’ hands. I won’t go into graphic details but I’m sure you can understand what I’m trying to say.

This is natural. All animals and birds have “urges” and “needs” and so don’t think your bird is being weird. It’s just something you need to be aware of.

Both female and male cockatiels get hormonal and will become over “affectionate” as described above, but it’s probably the males who exhibit this behavior the most. It usually peaks during the spring.

To try and prevent your cockatiel from getting “frisky” with you, there are a few things you can do:

What is a velcro bird?

Velcro is that material that sticks to itself and is hard to remove. A velcro bird is a fun nickname for a bird that has a very strong bond with its owner. The bird shows lots of affection towards its owner and “sticks” to the owner like velcro.

If you have a Velcro bird, it means you have done a good job in taming and bonding with it. A Velcro bird is great to show off to friends but the situation can get a bit tiresome. A Velcro bird is an obsessed bird. Imagine having a bird screeching for attention with you when you’re trying to get some work done, watch a film or get some sleep.

The best advice is that you have to find the right balance between bonding with your bird and having boundaries. It’s important to give your bird time and space to do its own thing and not to let it think that you are there for him 24/7.