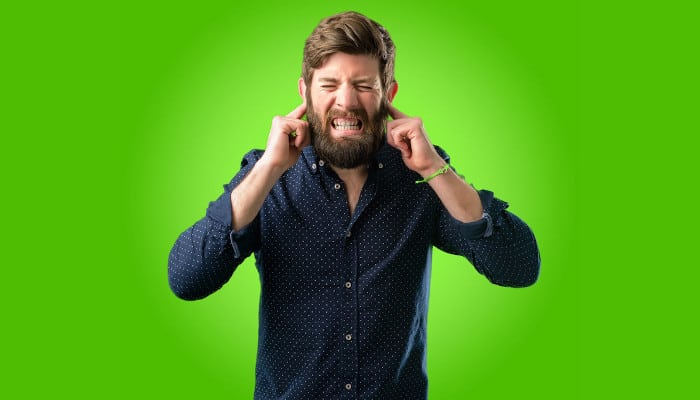 All birds can be noisy and cockatiels are no exception. They are social creatures and their need to communicate with other members of the flock comes from their natural instincts.

In the wild, cockatiels communicate with other birds by screeching in order to warn of predators and to make sure all members of the flock are present.  Don’t think that having just one cockatiel in a cage will mean that instinct goes away and he’ll be nice and quiet for you. He won’t! A solitary bird that has bonded with you will consider you as part of the flock and will be chirping, squawking, screeching at you at various times of the day.

Having said that, cockatiels are not the noisiest type of parrot. There is a type of cockatoo called a Moluccan cockatoo that can screech at an impressive 120 db. To give that context, any sound above 105db will damage the human ear drum.

Coming back to cockatiels, in this article, I discuss the factors that determine how loud a cockatiel can be and also describe some of the common sounds they make.

In general, male cockatiels make more noise than the females. In fact, the actual loudness (volume) of males and females is about the same, but the males will chirp, squawk and screech more frequently. There are fewer silent periods with a male. Owners of male cockatiels often complain that they never shut up!

Having said that, birds are individuals and some females can be noisy and some males can be quiet and calm. But if you are looking for a quiet bird (for an apartment or condo, for example), then from a statistical point of view, you will have more chance of getting a quiet bird if it’s a female.

Now let’s look at some of the different sounds and situations in which cockatiels make those sounds.

A “contact call” is a “chirp”  or “screech” (depending on how loud it is) that a cockatiel emits when he sees people come or go.  When he sees his owner first thing in the morning, the contact call means “hello, how are you since the last time I saw you?”

If there are other people in the house that he can hear or can’t see, the contact call is acting as a kind of roll call – He wants want to know who is present.

When someone leaves the room, another contact call will be emitted and that means “Bye! Where are you going? Are you coming back? Don’t leave me!”

These calls will range in volume from a low chirp to a loud screech. It all depends on the individual bird and its temperament.

Cockatiels are the noisiest early in the morning at dawn and in the evening at dusk. If they’re going to screech, that’s when they’re most likely to do it. It can last for several minutes or even up to 30 minutes. They do this in the wild in the morning to check that everyone made it through the night and in the evening to make sure everyone is therefore before they sleep.

Cockatiels need a lot of sleep. In fact, every night, they need about 12 hours of rest and sleep in a very quiet environment. If there is too much noise and movement when they’re trying to get to sleep, they will let you know that they are angry at you by screeching and squawking at you.  The message here is clear – “IT’S TIME FOR BED!!”

In general, cockatiels don’t like the constant noise from television and radio. When cockatiels hear human voices, they like to hear them nice and clearly and that is often not case with a TV on in the background. This can annoy a cockatiel and he’ll express it by screeching and squawking!

Chirping is the kind of noise that sparrows make. It’s a lowish volume form of communication, much quieter and less piercing than a squawk or screech.

Cockatiels will chirp for just about anything, but they often do it to express surprise at something. – If a cockatiel hears an unfamiliar noise or is surprised by something new that it can see, he will chirp in an inquisitive tone as if to say “What was that noise?” or maybe “What is that? What are you doing?” Often his crest will be upright when making this noise and he’ll look very alert.

If several cockatiels share a cage, they will often chirp away at each other and this is just them chatting and interacting. It’s a sign that they are happy and content and this isn’t usually very loud.

When a cockatiel is grinding his beak, it’s a sign of being content and comfortable. He is feeling at ease in his surroundings and not at all stressed. It’s similar to a cut purring.  It’s common for a cockatiel to grind its beak in the evening as he’s dropping off to sleep. So if you hear this sound in the evening, it’s time for you to dim the lights and to leave your cockatiel in peace to rest.

Beak banging is when a cockatiel repeatedly bangs his beak against a hard object in order to make as much noise as possible. It looks like he’s head-banging. They often bang their beaks against the bars of their cage, their perch or food bowl.

The most common reason for this behavior is to get attention, either from other birds in the cage or from people in the home.  They are feeling playful and excited when they’re doing this so you might want to let your cockatiel out of the cage and stretch his wings and play with him a bit.

During the mating season,  male cockatiels will bang their beaks to show off in front of females.

It’s often a bad sign when a cockatiel is hissing. It usually occurs when the bird is feeling a bit cranky and annoyed. He is saying,  “Leave me alone. Go away! Back off!”  It can do this to people, other birds or anything else it sees as a threat.

This type of annoyed hissing isn’t particularly loud but it is a sign of aggression and he could bite if you don’t leave him alone.

I discuss hissing in more detail in this article: Why do cockatiels hiss?

Cockatiels are able to talk but they talk a lot less than other parrots.

A cockatiel will usually only talk if you have trained it to do so over several weeks or even months through repetition.  So if you want a quiet bird that doesn’t talk, don’t start training it! Once a cockatiel has learned a words or phrase, you can’t train him to stop. He will take great delight in repeating the word or phrase over and over.

One solitary cockatiel in a cage is easier to train to talk than a pair of birds. The pair of birds will be too interested in each other and will most likely ignore any attempts to train them.

When birds are talking, they are just mimicking what they hear in certain situations, but they don’t really understand what you (or they) are saying.

Be very careful with curse words. You might think it’s funny to hear a cockatiel swearing like a sailor, but believe me, you will very quickly get sick of it and so will your neighbors if you live in an apartment or condo.

When cockatiels talk, they do so quite loudly. Their voices are quite piercing and high-pitched and they don’t really whisper. If they’re talking, they’re doing it to be heard and to show off a bit!

Sometimes it’s not the bird making the most noise – It’s the owner doing the training who is speaking very loudly and repeating the same words and phrases over and over. If you’re concerned about getting complaints about your bird talking, understand that your neighbors will also consider you’re part of the problem. Example if they can hear you every morning at 7am saying “Hell, how are you?” over and over for an hour, then you’re going to drive them nuts!

Sometimes the source of a cockatiel’s noise is his toys and what he’s doing with them. Cockatiels love bells but they can get noisy and irritating after a while.

Mirrors aren’t noisy but when a cockatiel (often a male) sees his reflection in the mirror, he will often break out into song!

Are cockatiels too noisy for apartments?

I would recommend getting a female and not a male because the females are so much quieter. If you can, place the cage the furthest away from the neighbors so that there is less risk of them hearing the noise and complaining.

You should also check your apartment’s rules and regulations with regards to pets before buying one.  I live in an apartment and the rule here is “Pets are allowed so long as they don’t disturb other residents” which actually leaves things open to interpretation.

If in doubt, maybe you could talk to your neighbors first, before making the purchase.

All pet birds make noise and that includes cockatiels. Cockatiels make lots of different noises, some very quiet, some very loud. Females are quieter than males and are a better choice if you live in an apartment.

3 thoughts on “Are cockatiels noisy?”