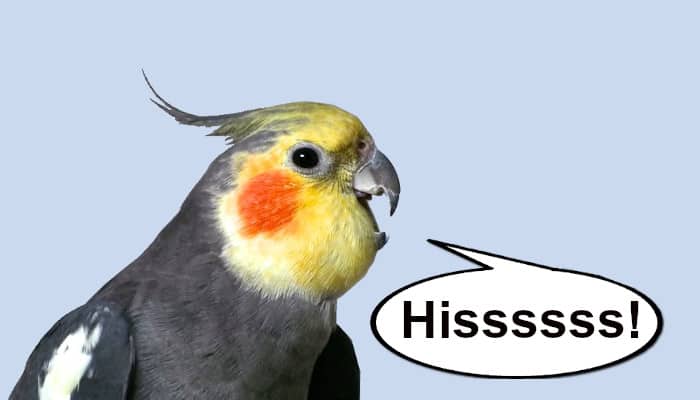 Cockatiels make lots of different noises including chirping, squawking, beak-grinding, talking, singing and, the subject of this article, hissing.

So why do cockatiels hiss? What are they trying to say? There are in fact a few reasons, all of which I cover in this article but the most common reason for hissing is that the cockatiel feels threatened or simply annoyed by something or someone.  When a cockatiel hisses out of annoyance, it will also raise its crest into an upright position, its feathers will be held very tightly to its body and emit the hissing sound through its slightly-opened beak.  It’s a very similar sound and posture to a cat that is hissing.

The meaning of this annoyed hiss is:

Common situations in which cockatiels hiss

Females hiss to protect the nest

A female cockatiel will protect her nest at all costs. If anybody or anything gets too close to her nest, she will hiss and become very aggressive to ward off the potential threat.

Cockatiels sometimes don’t like being disturbed when they’re eating and they will show it by hissing. They are more likely to hiss when eating if the person or thing that disturbs them is unfamiliar to them. This behavior is common in many other animals, for example dogs and humans!  Think about it – Do you like it when you’re trying to eat your dinner and someone is pestering you? The best advice here is to simply leave your birds in peace to enjoy their food.

An untamed bird is a bird that is not yet used to contact with humans. This is usually the case with a new cockatiel that you have recently bought and not yet tamed. If you try to put your hand in the cage of an untamed bird and try to touch it, it will most likely hiss at you and try to escape to the back of the cage.

This is how you should interpret this hissing. – The bird is saying “If you continue to approach me or touch me, I’m going to bite you.” You, the owner, must read this warning and act on it by backing off. If you fail to do so, not only will your cockatiel bite you this time, but it will be more likely to hiss at you in the future because you have broken their trust. If you continue to ignore these warning hisses, the cockatiel will very quickly mistrust you and not allow you to approach it in the future.

The best solution to this type of hissing is to tame your cockatiel as soon as possible after buying it.

Newborn baby cockatiels, when they get to about ten days old, will begin to hiss whenever they are disturbed. So for example, if you inspect the nest to see how they are getting on, they will hiss at you and even raise their tiny little crests! It might look cute, but they are distressed and you should leave them in peace.

As the fledglings get a bit older, they might even spit and attempt to spread their wing stumps. Again, you need to give them space and peace.

When baby cockatiels hiss after feeding, this is a positive sign. They are not annoyed or feeling threatened. On the contrary, they are expressing excitement and contentment at being well fed. It means they are satisfied and full or nearly full. This type of hiss isn’t accompanied by the raising of the crest and the hiss is usually a bit quieter and less intense when compared to the usual “I am annoyed” hiss.

This is not necessarily a negative emotion. It could be a sign of their frustration (if they are not getting any action) and in that case, the hissing means they’re a bit annoyed.

But usually loved-up male cockatiels who hiss are in fact doing it as part of their courtship ritual. It’s not aggressive and you will often see them also bobbing their heads and even singing between hisses!

It’s common for cockatiels to hiss in their cages when you are preparing them for bedtime.  They will usually do it when you start dimming the lights and/or covering the cage for them.  This hissing is usually for one of two reasons:

Birds that hiss in the wild

It’s not just domesticated cockatiels that hiss. Many other species of wild birds are known to hiss and the hissing behavior in the wild has a very specific purpose – To chase away predators.

For example, barn owls are known to hiss.  Their hisses are long and loud and they are given repeatedly to intimidate predators.

In 2011, a study was carried out on peahens to find out how they reacted to predators during the day compared to at night.  During the day, the peahens emitted anti-predator calls, extended their necks upward, adopted a preflight posture, and approached the predator.

At night, the peahens emitted soft hissing calls, remained stationary, puffed up their feathers and raised their tails.

It appears that in the wild, hissing is more common at night. This is probably due to the bird not being able to completely identify the threat. Maybe that explains why cockatiels hiss at bedtime.

What to do if my cockatiel is hissing

If the hissing is aggressive and directed at you, you should leave it alone. If it is hissing at you from within its cage and you’re close to the cage, then move away and give it some space and peace. If the hissing continues, cover the cage until it calms down.

If your cockatiel is out of the cage and hissing at you, then move away. If the hissing continues, try to determine what is annoying it. Common possible causes in the home are other pets, other people, unusual noises and bad smells. Try to solve the issue and see if the hissing stops. As a last resort, put the bird back in cage and cover cage until it has calmed down.

Train a cockatiel not to hiss

You need to reward good behavior through positive reinforcement every time the bird does what you want. Do NOT punish bad behavior.

The good behavior that you want to reward is the cockatiel allowing you to approach it, touch it and the act of stepping up on to your hand. When your bird does this without any aggressive behavior, give it a treat and praise it by saying “Good boy/girl, [name]”  If you do this a few times per day for several days, your cockatiel will soon be very happy for you to be close to it and touch it.

So there you have it. Hissing usually means “Go away and leave me alone.” and you should do just that!  Occasional hissing is perfectly normal and nothing to be concerned about. 🙂