Skip to content
Home > Why do cockatiels bob their heads? 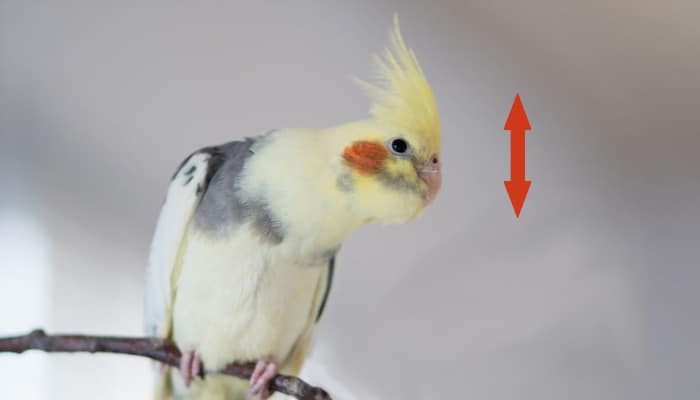 I’m sure you have all seen a cockatiel bobbing its head. – The action of moving its head down and then back up again in a short quick movement. But what does it mean exactly? Why do cockatiels bob their heads like that? Well there are a few reasons:

Cockatiels bob their heads when hungry

When cockatiels are hungry, they will often bob their heads as a way to get your attention. This is often accompanied by a hunching of the shoulders and something called “wing flipping”, which is a very fast adjustment of their wings. It looks like their wings are twitching.

Head bobbing when hungry is most common in baby cockatiels, either when they’re being hand fed or their mother is feeding them.

Cockatiels bob their heads to music

Cockatiels like music and they’re not shy to show it by dancing and bobbing their heads in time to the beat. The best type of music to see this behavior is music with a strong beat and/or bass. Even if your cockatiel doesn’t immediately start bobbing his head to music of his own accord, if he sees you doing it, he will often try to imitate you! When cockatiels are bobbing their heads and dancing to music, they are happy and having fun. This is a very positive sign.  Word of warning though – Don’t put the music on too loud. It will annoy your bird.

Seeking attention and showing off

A cockatiel bobbing its head could also be showing off and trying to get attention – either attention from you, if you’re bonded, or maybe from another bird it is trying to impress and mate with.  The head-bobbing can be translated as “Look at me, I’m so amazing and good-looking!”.

“Regurgitation” means bringing up (vomiting) food that has already been eaten. This does not mean that the bird is sick. Birds usually do this to feed their young. Breeding pairs of cockatiels also regurgitate food for each other as part of the process of bonding. In that context, it’s a sign of strong affection because they are essentially sharing their food with loved ones and sacrificing themselves.

If you and your cockatiel have bonded, it will show its love and affection for you by bobbing its head, stretching its neck out and then regurgitating its food. How romantic!

On a more serious note, be careful if your cockatiel does this a lot – It means that your cockatiel actually considers you as a mate and that can cause aggressive behavior towards you or to other birds in the flock due to jealousy. I have seen a cockatiel bob its head and regurgitate food for its female owner and then to attack the owner’s boyfriend when he arrived home and kissed his girlfriend! So be careful. It’s good to bond with your bird but you don’t want your bird to fall in love with you.

Trying to see or hear better

Due to how a cockatiel’s eyes are positioned wide apart on the head, the bird needs to bob its head and tilt it in order to see something that is high up and slighly out of its field of vision. It can also be because the cockatiel is trying to hear or listen to something.

If your cockatiel bows its head down and keeps it down while very close to you or another bird, it is a sign of affection. When your bird does this to you, it wants you to gently stroke and scratch its head. When it does this with other birds, it wants the other bird to preen them.

This is usually a sign that your cockatiel is annoyed about something. If you’re talking to your bird, it wants you to lower your voice or to stop talking completely. If the cockatiel is eating something, by shaking its head, it’s saying it doesn’t like it.

Do other birds bob their heads?

Yes! Birds that spend a lot of time walking on the ground bob their heads backwards and forwards when they’re walking. This is very common in pigeons and chickens.

A study was done in 1978  to find out why pigeons bob their heads backwards and forwards when walking. The answer is fascinating. Pigeons move their heads like that in order to stabilize the moving surroundings. After the forward movement, the head stays in that position while the rest of its body catches up. During those milliseconds while the rest of the body is “catching up”, the head is in fact stationary in relation to the surroundings. The head is therefore “stabilized” with its surroundings and that’s how the pigeon can see its surroundings more clearly.

This was proven by putting a pigeon on a slow-moving treadmill! When on a treadmill, the surroundings aren’t moving and the pigeon stopped bobbing its head when walking!  (I wonder if the pigeon enjoyed its time in the gym!)

Cockatiels also bob their heads slightly when walking, but it’s not as pronounced as pigeons and chickens.

In case you’re wondering why we humans don’t bob our heads in the same way – We use our eyeballs to stabilize our surroundings.

So there you have it. It’s not just cockatiels who bob their heads – Many other species do it too.