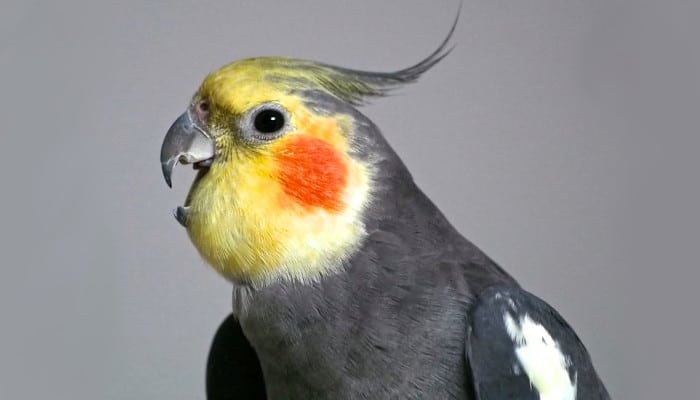 The short answer is yes. Cockatiels, like all birds that live in a cage in the home, are quite messy in nature.

There are several sources and reasons for cockatiel being messy and we’ll look at each of these in detail in this article:

Bird dust is a white powder that is produced by the birds’ small feathers that are closest to the skin. This powder is perfectly normal in a healthy bird and it spreads to all the feathers when the bird preens itself. Its purpose is to help keep the feathers waterproof and looking shiny. Unfortunately, as you can imagine, this white powder doesn’t just stay on the bird. It gets….. everywhere in the home. Expect to have a thin layer of white powder on all surfaces of your home, from the couch, to the floor, to table tops and all surfaces.

This dust is not only messy to look at, it can also cause respiratory problems for your cockatiel and also for the people living in the home. Some people are also allergic to bird dust. It’s worth finding out before buying a bird that could live for 20 years!

The best solution to bird dust is through an air filtration system like HEPA because that will remove the particles from the air before they even settle. Without filtration, very regular cleaning of your home is imperative. You will have to dust all the surfaces and vacuum the carpets, couches and cushions at least twice per week. A good compromise is to only use one room in the house for your cockatiel. You will put his cage in there and that’s the only room he’s allowed to fly in. Once you have chosen your “bird room”, you then furnish it with easy to clean furniture – wooden or plastic chairs without cushions, wooden or linoleum floors etc. That way, the room can be easily cleaned and the dust doesn’t accumulate.  It also simplifies cleaning poop.

Cockatiels are not the only birds that produce this dust.  African Greys, Cockatoos and Amazons produce it also.  If you think this dust is going to be an issue, a parakeet (aka budgie) might be a better choice for you because they don’t produce a lot of dust.

Cockatiels like to eat and they don’t sit down and eat delicately with cutlery and a napkin! No, they will eat continually all day like it’s their last meal. When they eat seeds, they hull (remove) the outer shells with their beak and discard them on the floor of the cage, in the water bowl or on the floor of your home. If you feed your bird grit, then that’s even worse because it gets everywhere.  Since cockatiels eat pretty much all day long, you really have to keep up with the cleaning and maintenance of the cage as well as your home.

There are a few things you can buy to stop food being scattered out of the cage and on to your floor. An example is something called a “cage skirt” which is a piece of elasticized material that you wrap around the outside of the bottom part of the cage. The skirt acts as a net.

So yes, it’s true that birds are messy eaters but it’s not their fault. That is what birds do. It’s up to you as the owner to clean up after your cockatiel. Food dishes should be cleaned every day and dishes with cracks should be thrown out and replaced by new ones because bacteria builds up in the cracks. Remove any leftover fruit and vegetables every day. It is unlikely that your cockatiel would eat food that has gone bad but uneaten fresh food is a source of bacteria.

Since cockatiels like to eat all day, they also poop a lot. Compared to other larger birds, cockatiels really do poop a lot.  In the cage, the droppings will fall to the bottom of the cage. Make sure your bird’s food and water bowl are not directly underneath the perch so that they don’t get contaminated. To catch the droppings in the cage, a good solution is to put several sheets of newspaper or wax paper on the bottom. Every few days, you then remove the top sheet along with all the droppings. Having said that, cockatiels often love shredding up sheets of paper into tiny pieces (I told you they were messy!) so you might end up using shredded paper instead of sheets.

It is actually possible to potty train a cockatiel so that it doesn’t poop outside of the cage. You can also potty train your cockatiel to poop in a designated area, for example on a perch under which you have put a layer of protective newspaper.

Young birds in nest boxes poop even more than adults so you’ll have to clean nest boxes once per day at the very least.

Cockatiels are chewers. I’m not talking about chewing food. I’m talking about cockatiels’ habit of chewing anything they can get their beaks on!  They are particularly fond of chewing wood and things made of wood. That’s not too much of a problem when they’re chewing their perch or a wooden toy or something that belongs to them in their cage. Where it becomes an issue is when they start chewing objects from your home like picture frames, chairs, bookshelves or even electrical wires!

The best way to curb the problem is to provide them plenty of chewable toys in their cage that you don’t mind if they chew. That way, when you do let them out of the cage, they will probably be less likely to chew anything else. Having said that, you should always keep a close eye on your bird when he’s out of the cage.

When your cockatiel loses its feathers, those feathers are going to create a mess. There is no way around it.  There are many reasons for this happening including molting, illness and plucking.

Normal molt – A cockatiel’s feathers go through a lot of wear and tear. Molt is the normal, natural healthy process of a bird’s feathers being replaced. In other words, their existing feathers will fall out and be replaced by new ones. Cockatiels molt pretty much all year round but they molt the most after the breeding season.

Molting due to illness – Sometime a bird will lose its feathers due to illness. There is a condition called “French molt” that is also known as “BPD” which stands for Budgerigar Fledgling Disease. This condition usually starts in young birds that are about to leave the nest. For some reason, young birds with this condition will shed or break its tail and primary flight feathers. This is usually permanent. French molt is relatively rare in cockatiels but it can happen so it’s important to be aware of it. I mention it in this article because when it happens, a lot of feathers are lost in a short amount of time and it creates quite a mess.

Abnormal molt – There is another type of molt called “abnormal molt” which is essentially when your cockatiel loses many of its feathers at once and doesn’t seem to be replacing them. This is usually due to temperature extremes, thyroid problems or shock. You should consult a vet.

Plucking – Feather plucking is when the cockatiel removes its own feathers with its beak. A small amount of plucking during molting is normal. The molting process is quite itchy for the bird and so plucking speeds up the process. However, sometimes cockatiels will pluck all their feathers out if they are anxious, stressed or even bored. Plucking can also be caused by a lack of protein in the diet.

Whatever the reason for your bird losing feathers – whether it be normal molting, molting due to illness, molting due to shock or plucking, there is going to be a build up of old feathers in your home. The lost feathers will gather wherever they fall. You’ll find them all over the cage and probably all over your home too. Even if your bird doesn’t leave the cage much, feathers will escape the cage and be blown around the place. If you’re allergic to bird feathers, you’re going to suffer. If you’re obsessive about having a spotless home, then the feathers will be a problem.

Cockatiels make great pets but you need to understand that they are messy birds. Don’t forget that cockatiels can live for up to 30 years if well taken care of. You need to decide before buying a cockatiel if the messiness is going to be an issue for you and members of your family.